SIHH 2018 saw watches inspired by all things grand and beautiful, from the animal kingdom to super-machines from the automotive world. But nothing is grander than the cosmo-verse, and these four timepieces give new meaning to having a ‘world of our own’. 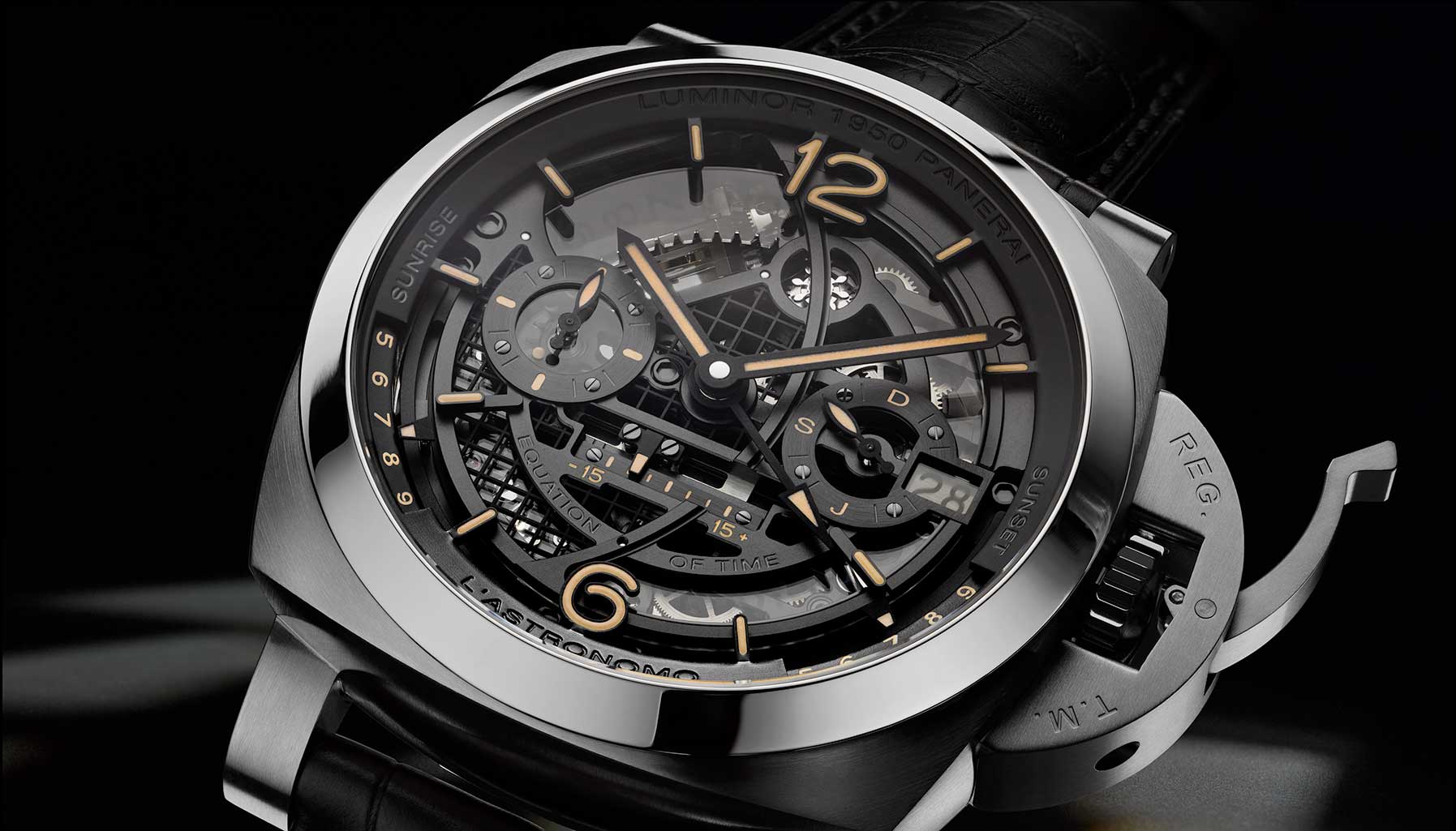 With the new L’Astronomo PAM920, Panerai officially has a moon phase complication to call its own. Dedicated to Galileo Galilei, this massive watch with a 50mm Luminor 1950 case in brushed titanium is a made-to-order piece personalised to the coordinates of the owner’s home city.

This is so that the moon phase indication is always accurate to his or her view of the sky, likewise with the sunset/sunrise indicator, and is always in sync with the GMT hand. At six o’clock the watch provides a linear equation of time display showing the difference between mean solar time and apparent solar time.

Its moon phase display doubles up as a day/night indicator where a photorealistic moon waxes and wanes beneath a midnight blue aperture dotted with stars, while a golden sun dominates the other half of the sphere. The movement, Calibre P.2005/GLS, is fully skeletonised and contains a new polarised crystal date display that reveals the numerals only when it comes under the date window.

This patent-pending invention comprises a borosilicate glass ring with laser engraved numerals and a date window also made of polarised crystal. The calibre’s tourbillon rotates perpendicular to the balance and completes one full rotation in 30 seconds. 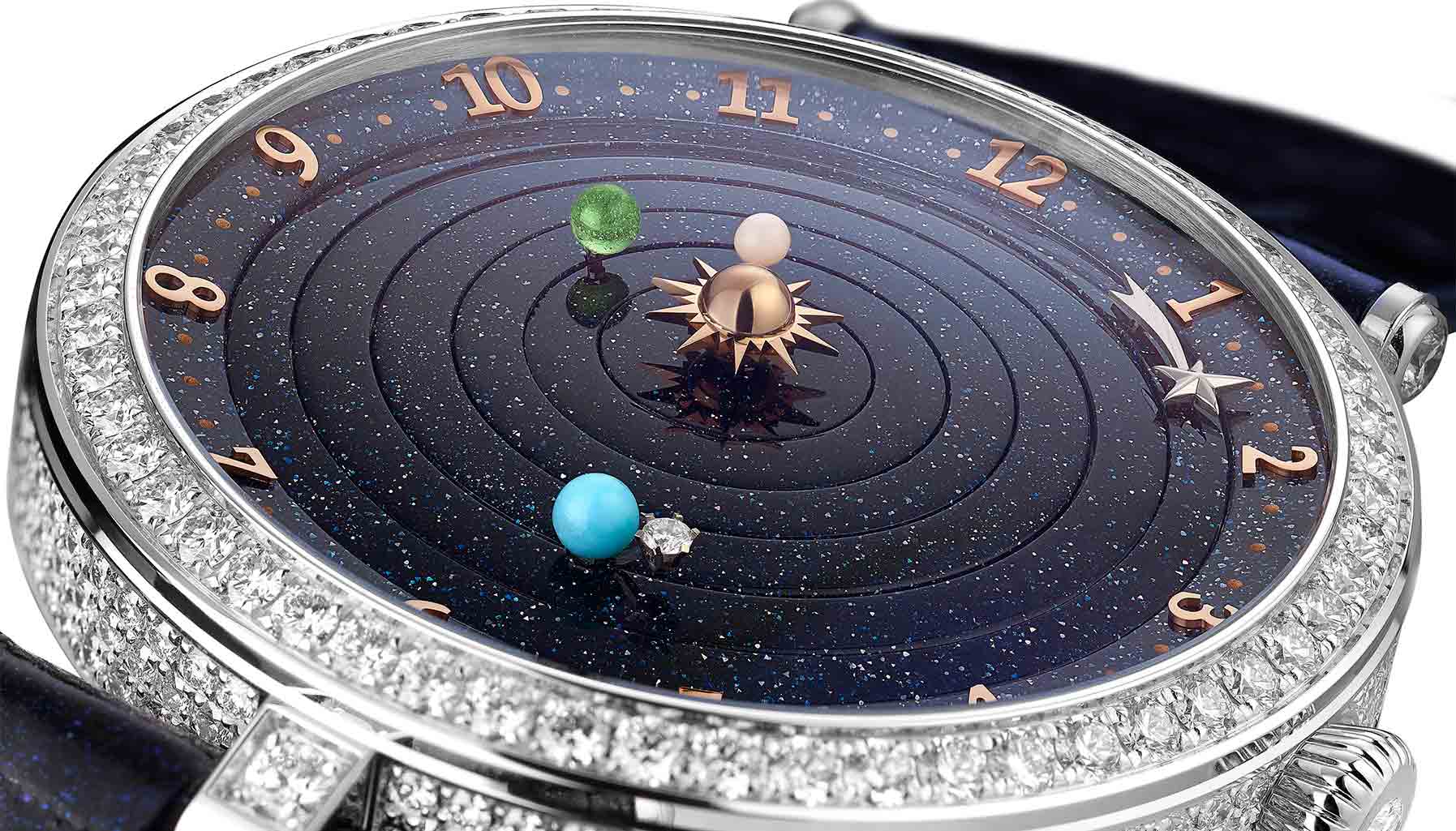 It’s hard to forget a watch like Lady Arpels Planetarium, especially when it gives you all the time in the universe. Following in the footsteps of the 2014 Midnight Planetarium watch, this elegant woman’s watch isn’t simply a downscaled version of that piece. In fact, it has a surprise of its own.

This watch partially displays our solar system beginning with the sun in pink gold positioned dead centre, Mercury in pink mother-of-pearl, Venus in green enamel and the Earth in beautiful blue turquoise. Like the first version, its aventurine dial is made of rotating rings (five for the planets and one for the time-telling comet) and was developed in collaboration with independent watchmaker, Christiaan van der Klaauw.

Unique to this piece is a diamond solitaire moon connected to and orbiting the Earth as it in turn orbits the sun – if you need reminding – once every 365 days. Venus does the same in 224 days and Mercury, 88.

The movement is bedecked in precious materials even on the back, where an aventurine disc functions as a legend (of sorts) and the oscillating weight made of turquoise and snow-paved diamonds. 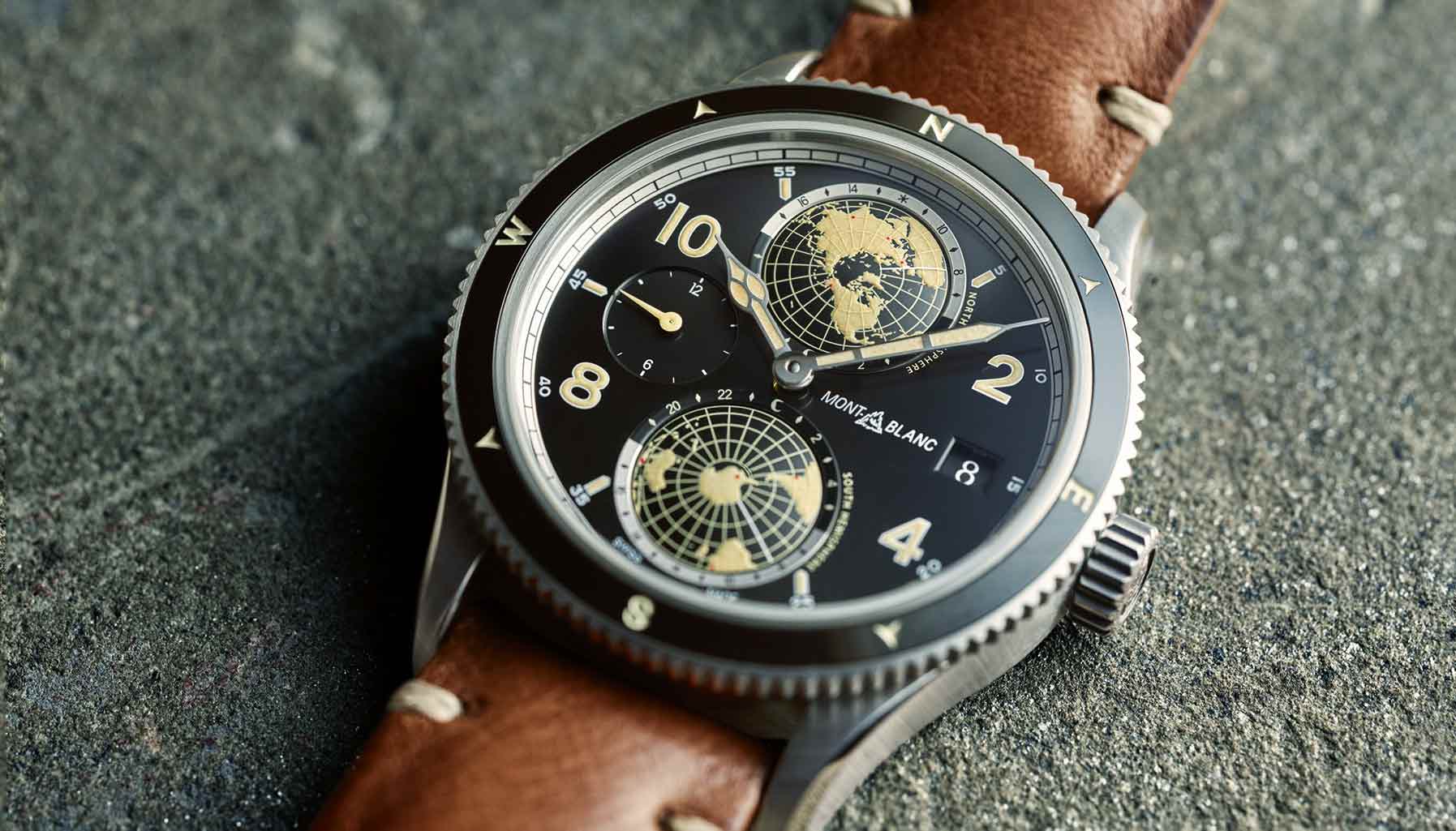 It makes perfect sense for Montblanc, a luxury brand named after Europe’s highest peak, to dedicate one of its watches to mountaineering. The 1858 Geosphere comes with a new manufacture movement Calibre MB29.25 developed at Montblanc’s engineers in Minerva Villeret, and is indisputably one of the best new timepieces of SIHH 2018. Two halves of the globe dominate the dial, rotating 360 degrees in 24 hours and functioning as a world time indicator.

Look more closely at the globes and you’ll be able to locate the world’s Seven Summits marked out in red dots. On the caseback, an engraving of Mont Blanc, a compass and two pickaxes reinforce the watch’s mountaineering spirit. In either steel or bronze, the watch has a bi-directional rotating black ceramic bezel with the four cardinal points and fluted edges.

Vintage throwbacks like the cathedral hands, the 1930s-style Montblanc logo and the railway minute track pay tribute to the historical Minerva timepieces. This is one of the few luxury watches that offer a wide choice of straps. Options include a black NATO strap, a cognac-coloured aged calfskin strap with beige stitching and the mountain-ready brown Sfumato aged calf leather bund strap. 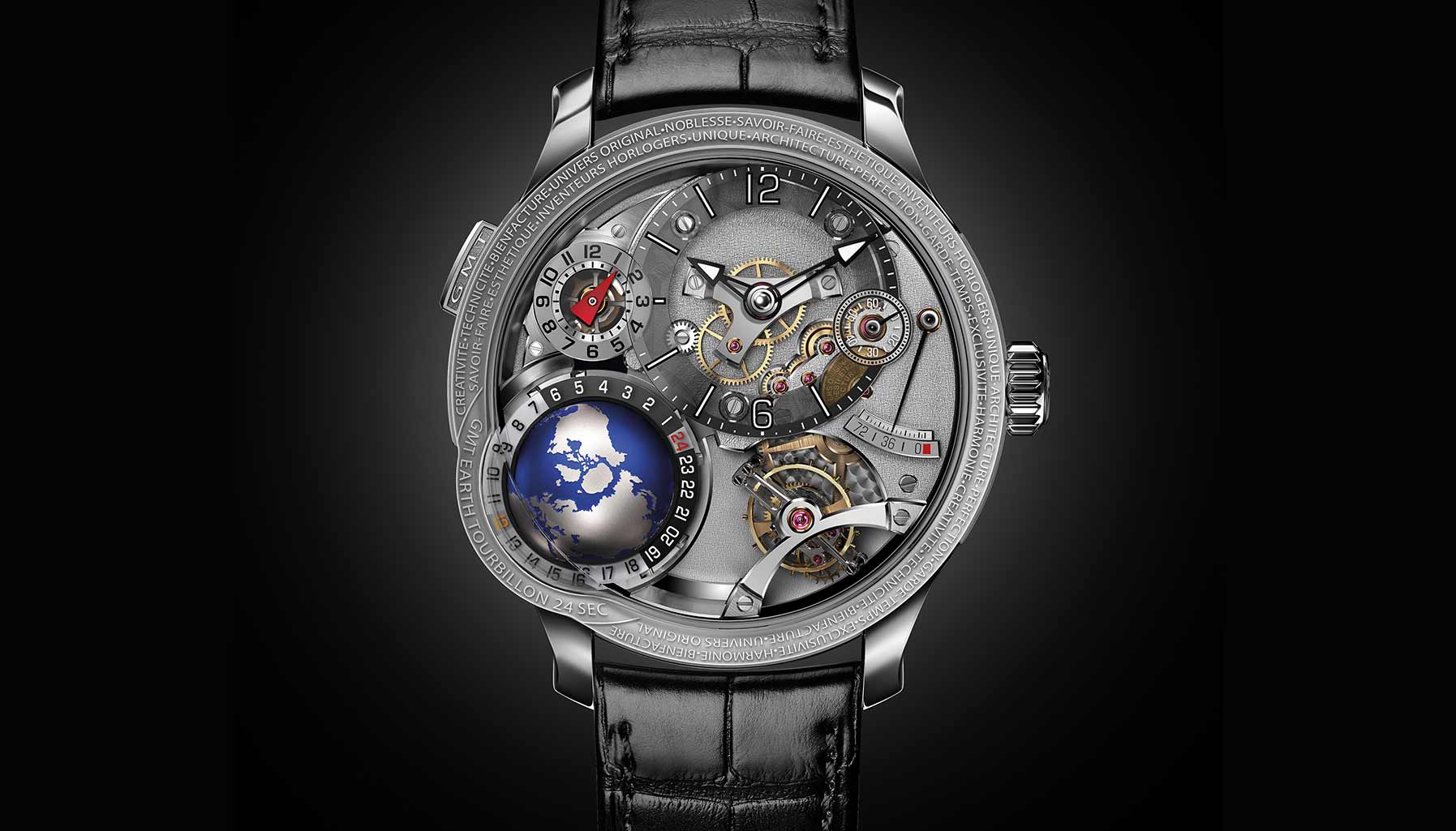 As far as world timers go, this is one that you can admire from any angle. Through the front, GMT Earth provides a stunning view of the multi-level movement architecture including an off-centred 24-second tourbillon inclined at 25 degrees, the hour-minute display, GMT display, a power reserve indicator and a three-dimensional globe.

Accommodating the latter feature necessitated an unusual crystal glass which is practically a hallmark of many Greubel Forsey timepieces. Front, back and lateral views of the globe are possible through the watch’s unique structure. Through the caseback is a prominent display of the world’s 24 time zones in both summer and winter, which is a first for the luxury watch industry.

GMT Earth is not a small watch and, since it’s cased in white gold, will be pretty hefty on the wrist. But all that mass only means more space for Greubel Forsey’s signature hand-finishing and decoration, which takes no fewer than 450 hours to complete. The lateral plates too bear engraved inscriptions that encapsulate the key values of founders Robert Greubel and Stephen Forsey.