Blackfishing: The deal on racial ambiguity, and why celebs need to stop profiting from it

Sympathising and empathising have taken on a whole new meaning with blackfishing. And, of course, it’s facing a  backlash. But what were you expecting? A pat on the back?

Does anyone feel sorry for Rachel Dolezal? Back in 2015, she was the branch president of the National Association for the Advancement of Coloured People (NAACP) in Spokane, Washington state, USA, and a committed civil rights activist.

As far as the Spokane police chief was concerned, even in light of the recently minted #BlackLivesMatter movement, she was irritatingly outspoken, and he decided to hire a private investigator to look into her background with the hope of dishing up some deleterious dirt.

It proved to be a simple task, and took no more than a meeting with Rachel’s folks in Montana to discover that she was white, born a blue-eyed blonde, and her fundamentalist Christian parents were of Swedish, German and Czech origins.

Dolezal had done everything possible to look like a person of colour – suntanning, and then applying bronzer when the tan wore off, braiding, weaving or turning her hair into dreadlocks, and ticking off the box marked ‘black’ on all relevant documentation.

She wanted to be black. She felt black. And that was good enough for her

D Is For Discrimination

Unfortunately, it was far from good enough for everyone else, and within days of the revelations of her actual ethnicity, her reputation and her life lay in ruins. White people were furious with her for being a fraud. Black people were even more irate for what they perceived to be a stunning lack of sensitivity in terms of her cultural appropriation – one that simply wasn’t hers to begin with.

Somehow, it never occurred to her that her friends – both black and white – might be angry at her for trying to be something that she wasn’t. And despite the supposedly salutary lessons to be learned, Dolezal appears to have become an inspiration for some of today’s Instagram influencers.

Basking In The Spotlight

Emma Hallberg is a white woman from Sweden who has nearly 300,000 followers on Instagram. She ‘presents’ as either black or of mixed race, and has been accused of ‘blackfishing’ – something defined by Urban Dictionary as “females of European descent…using makeup to manipulate facial features in order to appear to have some type of Black African ancestry.” You can always trust the internet to waste no time whatsoever in coming up with a pithy, emotive hashtag.

The Eyes Have It

Unlike Rachel Dolezal, Hallberg has never claimed to be black, or even of mixed race, but you’d have to be seriously deficient in the mental capacity department to imagine that she’s trying to do anything other than appropriate a ‘look’.

Even a cursory inspection of Hallberg’s ‘before and after’ images demonstrate the obvious blackfishing. Hallberg, however, has an eyeroll-inducing explanation for it: Her ‘Before’ snaps were taken prior to a holiday (she tans easily, apparently), while her ‘After’ pictures are the result of time spent basking in the sun. She tans easily, have I mentioned that? Also, her dark, expertly pencilled eyebrows are a thing of…I want to say beauty, but all I can think of is photoshopping. 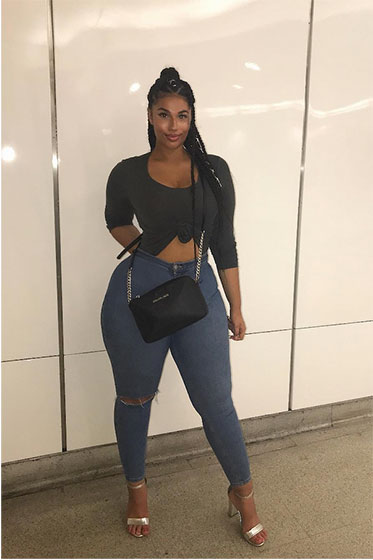 Or Is It All In The Thighs?

The same could be said of the latest inductee to the blackfishing witness box/hall of fame who goes by the name of ‘Alicja B’, but was originally named by her culturally insensitive Polish parents as Aga Brzostowska – I mean, how could they have possibly known in advance the ethnic direction in which their daughter was going to head?

By her own admission, she doesn’t do it “maliciously to look black,” – which has to rank as one of the quotes of the month – but because she is naturally olive-skinned and has developed a ‘full figure’. She’s also claimed that she’s certainly “not going to stop going to the gym to grow (her) thighs.”

Despite receiving lots of freebies from clothing and makeup companies because of the way she looks, she claims that she’s not trying to appear as a person of colour in order to facilitate those deals, but the social media world and beyond is up in arms anyway. People of colour are suggesting that others (such as Aga, sorry, Alicja, and Emma) have no right to culturally appropriate without going through the kind of suffering that marginalised people have endured throughout history.

Others will aver that there is no reason why ethnicity shouldn’t have the kind of spectrum that we are now encouraged to adopt in processing gender identification. Why can’t we have a new version of identity politics so that race and gender can be on the same page?

In this day and age of self-determination, there’s an argument for allowing people to be whatever the hell they want to be, and looking however the hell they like. Rachel Dolezal, for example, would place herself on the spectrum as “trans-black”, whatever and however that even means or appears.

I think it’s absolutely fine to identify with almost anything. Isn’t that a prerogative of being a human being living in an enlightened, emboldened 21st century? It’s what you claim to be that becomes an issue. Personally, I identify with being a middle-aged billionaire and a former professional footballer with an IQ higher than Ainan Celeste Cawley’s, but others might disagree, and I would never stake the claim.