The origins of sushi aren’t exactly Japanese, so we hear

Sushi first came to China, then Japan, and was later exported to the US and the rest of the world

The Japanese dish of sushi is pretty much ubiquitous around the world. From nigiri, with its slice of raw fish on a mound of rice, to the maki roll wrapped in nori, or seaweed, sushi looks deceptively simple to make.

But there is so much more to sushi than meets the eye: the quality rests on the cut of the fish, its freshness and provenance, the origin of the rice, how it was prepared and seasoned, and the kind of vinegar and sugar used.

However, the sushi we know today tastes and looks very different to how it did centuries ago. First of all, the rice in the original “sushi” was not intended to be eaten. Mixed with salt, it was used to preserve the fish and then thrown out.

The combination of rice and fish, he explains, originated in the third century along the Mekong River in Southeast Asia, where countries such as Thailand, Vietnam, Myanmar, Laos and Cambodia are now situated.

After the fish were cleaned and gutted, they were covered in the salt and rice mixture in buckets for several months, or much longer, to preserve the meat. Before they ate the fish, the rice was discarded because it was too salty to consume.

By the 12th century, this method of fermenting fish had travelled from the Mekong to China, and then on to Japan, where it was called narezushi. However, in the 16th century, in the Edo period, Araki says, vinegar replaced salt in the preservation process, which was a major step forward in the development of sushi. It also gave birth to the name sushi – which translates to “vinegared rice”.

“With vinegar, you only need to marinate the fish for a few hours or overnight, so that shortened the time to eat the fish compared to six months or a year,” Araki says.

That led to the fish portions becoming smaller in the 18th and 19th centuries, from a whole fish to slices as large as the circumference of the hand. Araki says the next major development came in the Meiji era, in the 1900s, when ice machines were developed.

If you want to try narezushi, Shiga prefecture to the east of the ancient capital, Kyoto, is the place where it is still prepared. But Araki warns it’s not for everyone.

“When something is fermented it goes bad. So you can imagine the fermented fish smells. The fish tastes salty and smells, but you can still taste the fish. When you have it with sake, it’s really good.”

So how did sushi go from being a traditional Japanese food to one loved by diners in the West? To understand its globalisation, you need to look to how the cuisine made its way to the US.

American academic James Farrer has been studying the Japanese food phenomenon for 12 years and says there have been multiple “booms” in Japanese food in the West, all characterised by showmanship, performance and exoticism.

The first wave of globalisation struck in the 1930s with sukiyaki, the hotpot-style dish with sliced beef and vegetables. “The very first Japanese restaurants in the United States would have been sukiyaki… It was popular because it was so exotic. It was served by women in kimonos… and it was associated with the idea of the geisha,” says Farrer, an associate professor of sociology at Sophia University in Tokyo.

However, this craze faded in the post-World War II period.

The next boom to capture Americans’ imagination was teppanyaki in the 1970s. “It was easy for Western people to like, because it’s basically meat… served in an exotic way by a chef who’s cooking on a metal plate in front of you,” says Farrer, who has lived in Asia for 30 years.

It was a theatrical dining experience far removed from the traditional TV dinners most Americans were used to at the time.

The next wave – the biggest to date, Farrer says – was sushi in the 1970s and 1980s. “Sushi was much more radical because it involved teaching people in the West… to eat raw fish, which was not a standard part of the diet in almost any other place in the world.”

The sushi boom occurred as Japan was becoming a global economic powerhouse. Unlike Chinese food, Japanese food was introduced to America by “rich migrants” and was eaten by wealthy Japanese businessmen, giving it an air of luxury.

Sushi first appeared in Los Angeles in the 1970s, “which was kind of the centre of global pop culture” at the time. “From there you had Hollywood stars, celebrity chefs and other opinion leaders… starting to embrace this new culture of sushi and popularising it,” Farrer says.

The raw fish phenomenon even made its way into films, including the 1985 John Hughes classic The Breakfast Club, in which bad-boy Bender rears in disgust when Molly Ringwald’s rich “princess” character pulls out a sushi lunch to eat during detention. “You won’t accept a guy’s tongue in your mouth and you’re gonna eat that?” he asks provocatively.

It was also a happy coincidence that sushi made a splash just as the US West Coast was in the midst of a fitness and weight-loss craze, and the macrobiotic diet was on everybody’s mind.

“In this period, you had this notion that Western cuisine was too fatty and oily and used too much butter and sauces… [whereas] Japanese food had the properties of being low fat. It was light and focused on the ingredients.”

Slowly the sushi craze migrated from the high-class fringes of the West Coast to the mainstream. To help ease diners into the idea of eating raw fish and seaweed, it started to take on more “American” characteristics, with sushi masters adding “substitute” ingredients such as “avocado and cream cheese”.

A by-product of this cultural collision is the California roll, with ingredients never used in sushi in Japan – cucumber, crab sticks and avocado. This invention also looked different to traditional maki, being turned “inside out”, with the nori hidden under a layer of rice.

“Most Americans didn’t like it… Seaweed, being black, made people question if it’s edible. It’s weird,” Araki says. “In the California roll they don’t see the seaweed on the outside, so they eat it.”

While there is much debate over who invented the California roll – some say it was Hidekazu Tojo in Vancouver; others insist it was Ken Seusa in Los Angeles – the roll is just one North American sushi adaptation that has gone on to influence the Japanese favourite’s global popularity.

“Japanese food in America had a huge impact on how Japanese food was popularised around the world,” Farrer says.

In 1996, Araki opened his own restaurant in Boston and for two years made what he describes as “crazy creative rolls”, adding ingredients such as avocado, wagyu, and colourful egg roe. He recalls he even made an Italian roll with meat, dried tomatoes, tomato sauce and mozzarella.

“Basically you can put whatever you want in the roll as long as it doesn’t fall apart,” he explains.

From America, sushi eventually made its way around the world over the following four decades, but, Farrer says, “by far the most popular market for Japanese food now is Asia. Asia is surpassing Europe and the United States as the place where new Japanese restaurants are opening.”

Araki has since shunned his crazy rolls and returned to traditional Japanese sushi. Having worked for Nobu Matsuhisa for 12 years, he follows the celebrity chef’s philosophy of making food with kokoro, which in Japanese means “spirit”.

“When you use kokoro to make food, then the customers can feel it,” he says. “I’m 59 years old now and I try to understand how to use kokoro to serve people.”

Your guide to Singapore Art Week 2020

What you (probably) don't know about wine

Cars to look forward to at the Singapore Motor Show 2020

Here's where to take first-time visitors to dine in Singapore 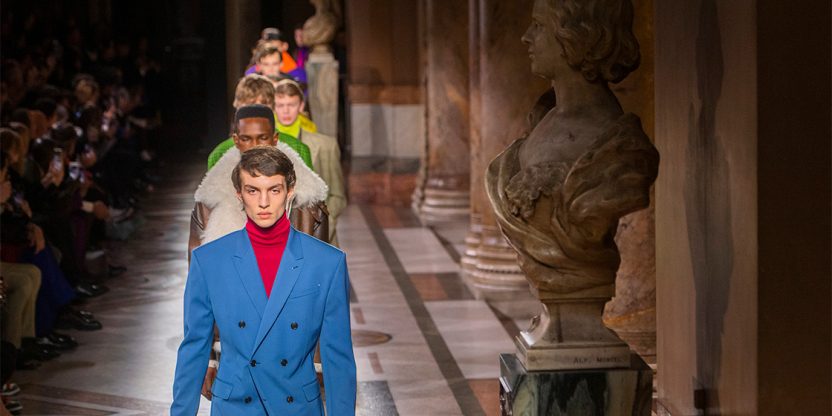 Looking to kickstart the new year right? Become a member at one of these gyms right now.

The post Gyms in Singapore for an effective full-body workout appeared first on Esquire SG.

Gyms in singapore for an effective full-body workout

Scarcity is the game and, clothing brand, bizZzare, is capitalising on it. With its merchandise that's only available via raffle, this time round, the label is raffling off black and white colourways of the sacai x Nike LDWaffles... before it's even released. We find out more from the man behind the brand, Le Messie.