Investing in wine is not a novelty anymore. The Financial Times and the Economist took notice of Burgundy wines in 2018 after it recorded a remarkable 35.52 per cent growth over 12 months, outperforming most blue-chip stocks, commodities and gold

It seems intuitive that red wines can make good investments, thanks to their well-known aging potential. But did you know sparkling wine, particularly from the best regarded houses in Champagne, can also yield significant returns? According to global wine trade exchange London International Vintners Exchange – Liv-ex for short – the most traded wine by volume in 2018 was not a top Burgundy or Bordeaux but the newly released prestige champagne Louis Roederer Cristal 2008.

Dom Perignon is even more of a household name when it comes to luxury champagne than Cristal. In fact, the brand is named after the French Benedictine monk, whom many credit for having invented champagne-making techniques. With the release of its much anticipated 2008 vintage late last year, Dom Perignon has been at the centre of wine news. With a stellar score of 96+ on RobertParker.com, Dom Perignon 2008 has been labelled as “the finest release since the 1996 vintage”. The fact that the house chose to blend pinot noir and chardonnay in a 50:50 ratio for the 2008 vintage is extremely telling – the last time this particular blend was used was for the legendary 1990 vintage.

Lukasz Kolodziejczyk, who heads the sommelier team at various Michelin-starred restaurants in London, was one of the few industry insiders to preview the wine before its official launch. He said, “Dom Perignon 2008 is not only comparable to, but is better than the 1990 vintage. Despite being bottle-aged for 11 years, the wine still tastes incredibly fresh with an intense minerality and an undertone of pristine citrus fruits.”

Would a great vintage from one of the most iconic producers make a viable investment? A closer look at the market performance of past Dom Perignon vintages is probably one good way to answer this question – bearing in mind, of course, that past performance does not necessarily guarantee future results. 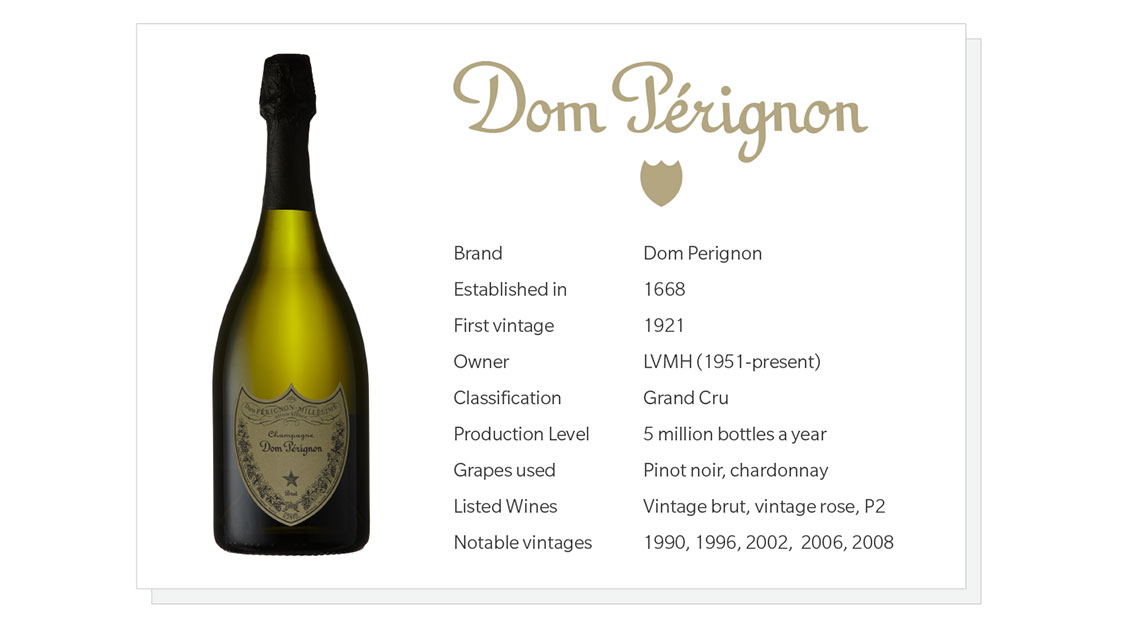 Market prices on Liv-ex show that the Dom Perignon vintage brut after 1990 has an average annualised growth rate of 5.92 per cent, with only the overpriced 2005 yielding a negative return since its release. Also, the 1990, 1996, 2002 and 2006 vintages have a Parker score that is equal or greater than that of the 2008 vintage. Expectedly, these prime vintages have performed strongly in the long and short run. 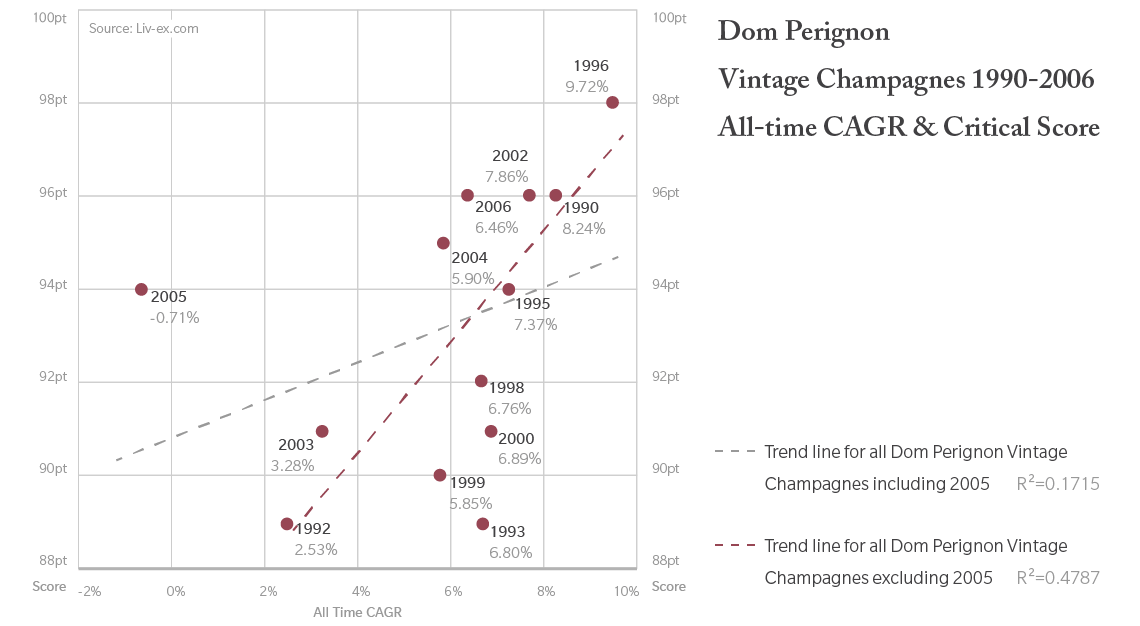 The scatter plot above shows an apparent correlation between the investment returns of the different Dom Perignon vintages and its critical appraisal. The outlier here is that the 2005 vintage, which was rated favourably but was somewhat overpriced when released, is the only vintage to start trading over the £1,000 (S$1,765) mark.

The release of Dom Perignon 2006, a better vintage at a lower price point, also did not do the 2005 vintage any favours. Additionally, overall market performance demonstrates that older vintages with higher scores have higher growth. Notably, Dom Perignon 1990 has consistently achieved double-digit returns over the last five years, showing a remarkable 33.8 per cent increase in market value in 2018. 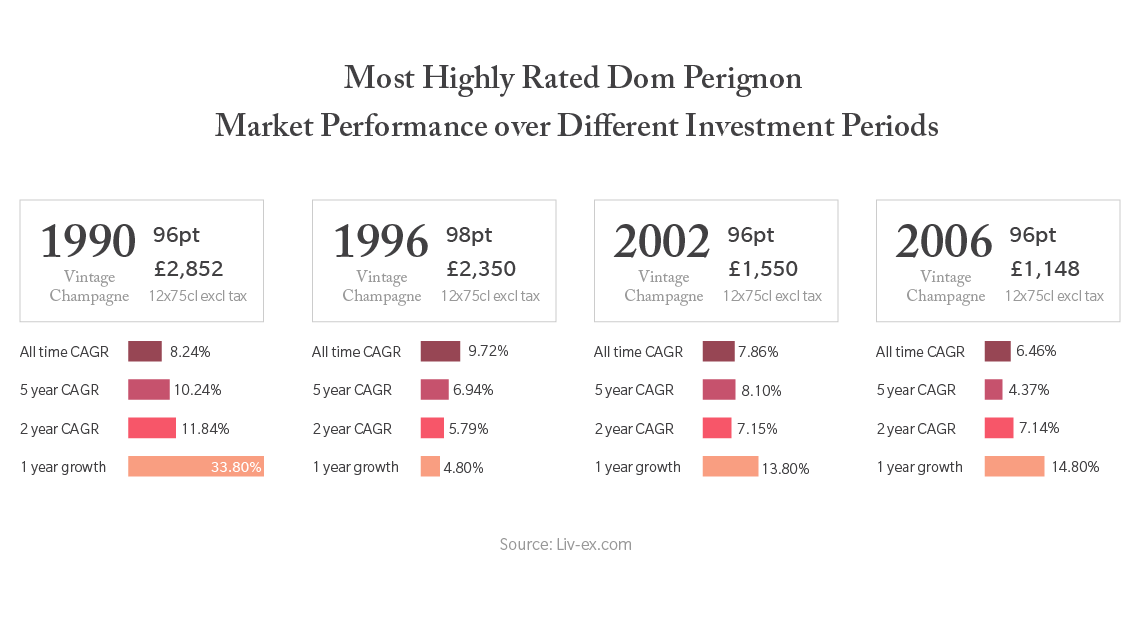 While the patience that is needed to hold a great vintage champagne for more than 20 years in order to see good profits may seem like an impressive feat, the simple truth is that fine wines – whether red, white champagne or sweet wines – have an active and ever-growing secondary market. Interested investors need only find a broker to buy a bottle of Dom Perignon 1990 on his or her behalf, store it and sell it when the price is right – Dom Perignon 1990 is increasingly a rarity after years of steady consumption. 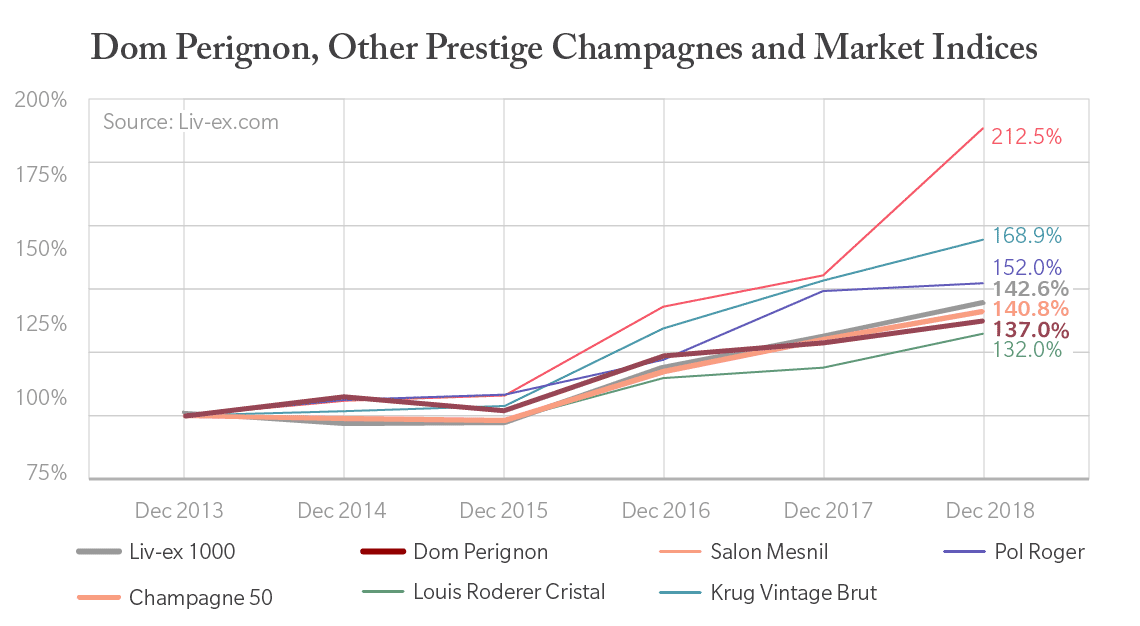 Let us put Dom Perignon’s performance into perspective. Clearly, Dom Perignon has undergone substantial market appreciation, but the numbers aren’t as much as Salon, Krug or Pol Roger. While outperforming the general fine wine market indicator LIV1000, the performance of Dom Perignon vintage champagnes has been roughly the same as the Champagne 50, which measures the performance of the top 50 most well-known investment-grade wines from the region.

Salon, Krug and Pol Roger are doubtlessly all outstanding prestige champagnes, but none of them can compete with Dom Perignon in terms of consumer awareness and market presence. Why then is it that a brand which is synonymous with luxury champagne is getting outperformed by smaller and more obscure houses?

The answer is simple, too: what gives Dom Perignon presence and availability is the same thing that prevents it from becoming a more lucrative investment opportunity. Investment-grade wine is essentially a luxury collectable and passion asset. In order to qualify as a luxury and inspire passion, it needs to exhibit not only extraordinary craftsmanship but also exclusivity.

Upon the release of Dom Perignon 2008, Emirates announced that it will serve this spectacular vintage to first class passengers, effectively making it the most consumed vintage in Dom Perignon’s history. The Champagne house is believed to produce five million bottles yearly, but the actual figure is probably much higher due to the highly efficient production facilities and management system that LVMH has put in place for this brand. In comparison, one of the world’s most sought-after champagnes, Salon, only produces around 60,000 bottles a year.

The 2008 vintage is set to become a modern classic with its outstanding balance and potential to age. However, for it to start recording double digit price increases, one might have to wait until Dom Perignon 2008 disappears from corner store shelves and airplane cabins. Simply put, Dom Perignon can be a viable investment – the recent growth of the 1990 and 1996 vintages demonstrate that.

For now, it is more probable that Dom Perignon’s hard-to-find older vintages will be better investments than the newly released 2008 vintage. If you’re still looking into 2008 vintage champagnes, you might want to try your hand with Cristal or Pol Roger, as these brands are more likely to give you higher returns in the next two to five years.

This Week in Luxury: The latest from The Macallan, A. Lange & Söhne and more

Robb Recommends: How to look and feel good this holiday season