In 2015, the then Italian prime minister Matteo Renzi gave his American counterpart Barack Obama a few bottles of fine Italian reds to sample. Unsurprisingly, Sassicaia made it into this selection

Since its inception in 1968, Tenuta San Guido’s Sassicaia vintage has always been a blend of 85 per cent Cabernet Sauvignon and 15 per cent Cabernet Franc. In its earlier days, the wine had more in common with Bordeaux clarets than with typical Chiantis, which were likely to have up to 30 per cent white grapes in them. The wine did not take long to shine on the world stage: Sassicaia was considered the best Cabernet at Decanter magazine’s London tasting in 1978. Today, it is one of the most iconic Italian wines. Cult Wines explains why you should seriously consider adding Sassicaia to your private cellar. 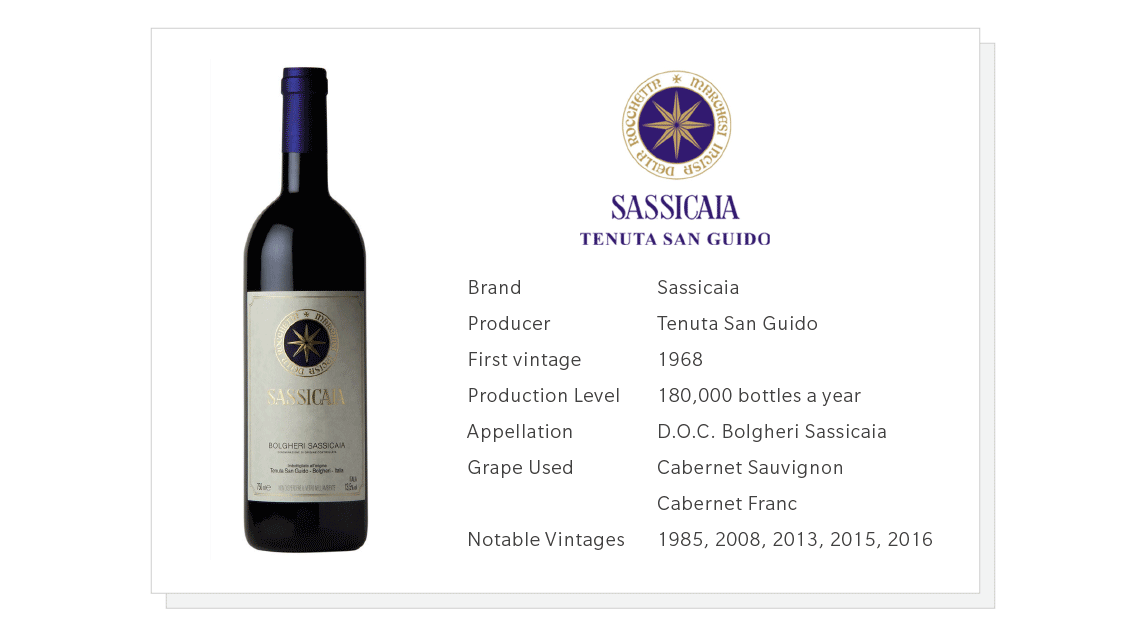 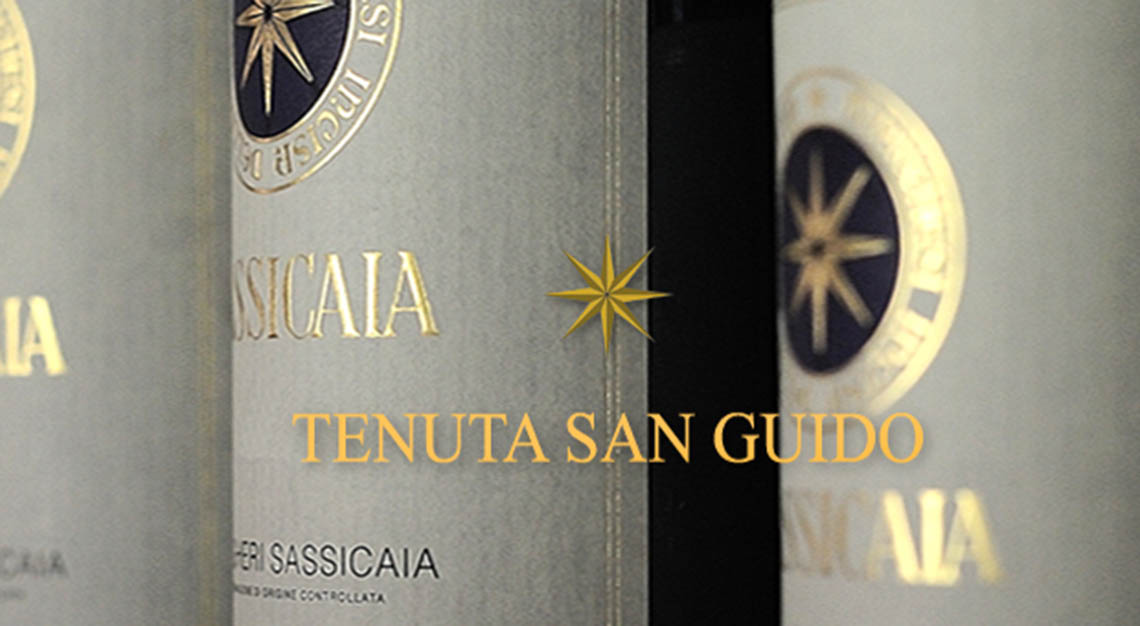 This movement gave birth to some of Italy’s most beloved wines: Tignanello, Solaia, Orenellaia, Massetto and the list goes on. Today, these outside-the-box wines and Sassicaia are known as Super Tuscans. They rewrote the rules of what constituted a Chianti wine and received their own geographical identification – Toscana IGT. Sassicaia is arguably the original Super Tuscan. However, it has not necessarily outperformed other top Super Tuscans. 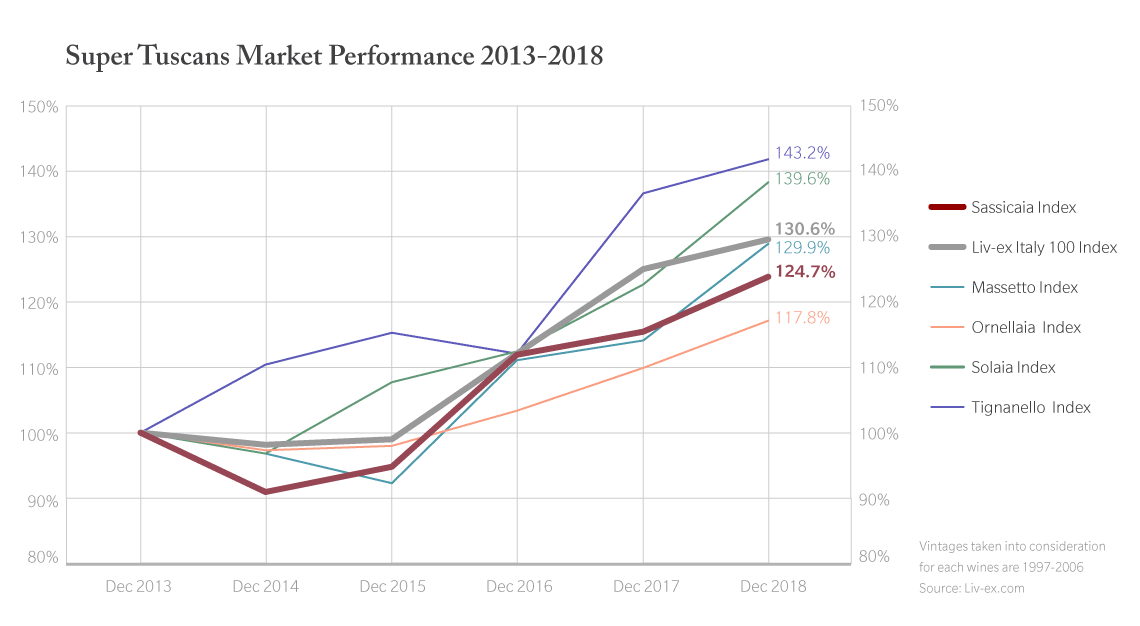 Many may point to its inconsistency in quality as one of the factors for Sassicaia’s mediocre performance. Comparing the past 20 vintages of the top five Super Tuscans, Sassicaia has had the widest range of Parker scores. 1997 was Sassicaia’s poorest rated one among them with low score of 85 points. 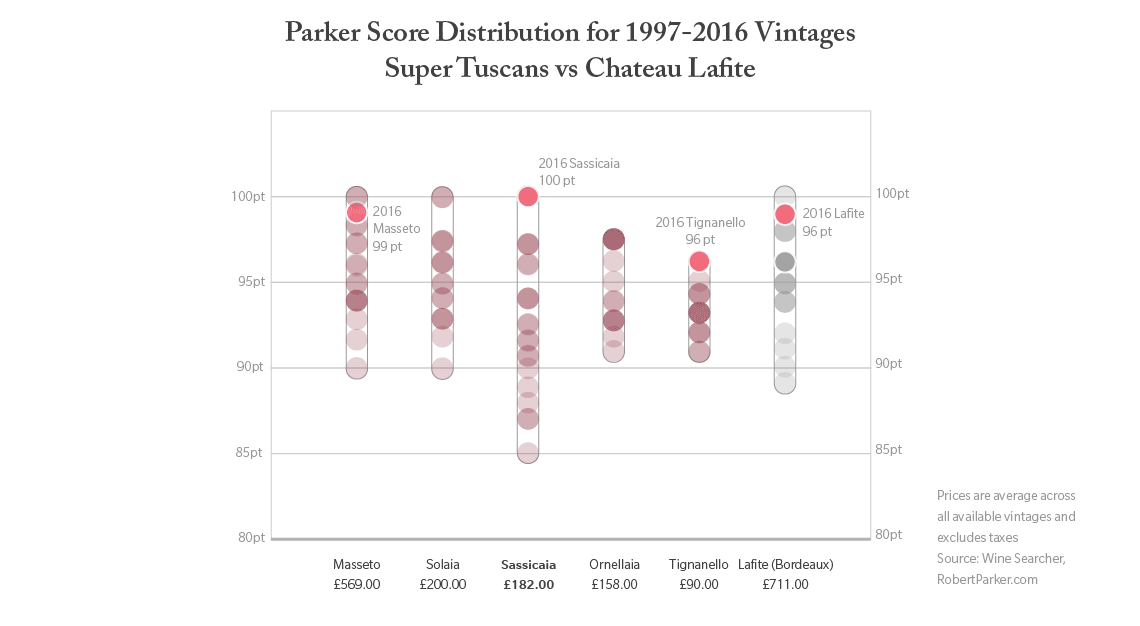 To put this into perspective, none of the past 20 vintages of Tignanello, Ornellaia, Solaia and Masseto scored under 90. All of them are reliable outstanding wines that rarely disappoint. On the other hand, Sassicaia can seem overshadowed by Tignanello and Ornellaia in terms of affordability and by all others in terms of consistency.

However, the latest vintages show some promising signs. In 2009, Tenuta San Guido, the producer of Sassicaia, brought on board a new oenologist: Graziana Grassini or “Lady Sassicaia” as she is more often referred in Italy. Since the change, critical appraisal of Sassicaia has been on a crescendo, with the 2015 vintage crowned by Wine Spectator as their “2018 wine of the year.” 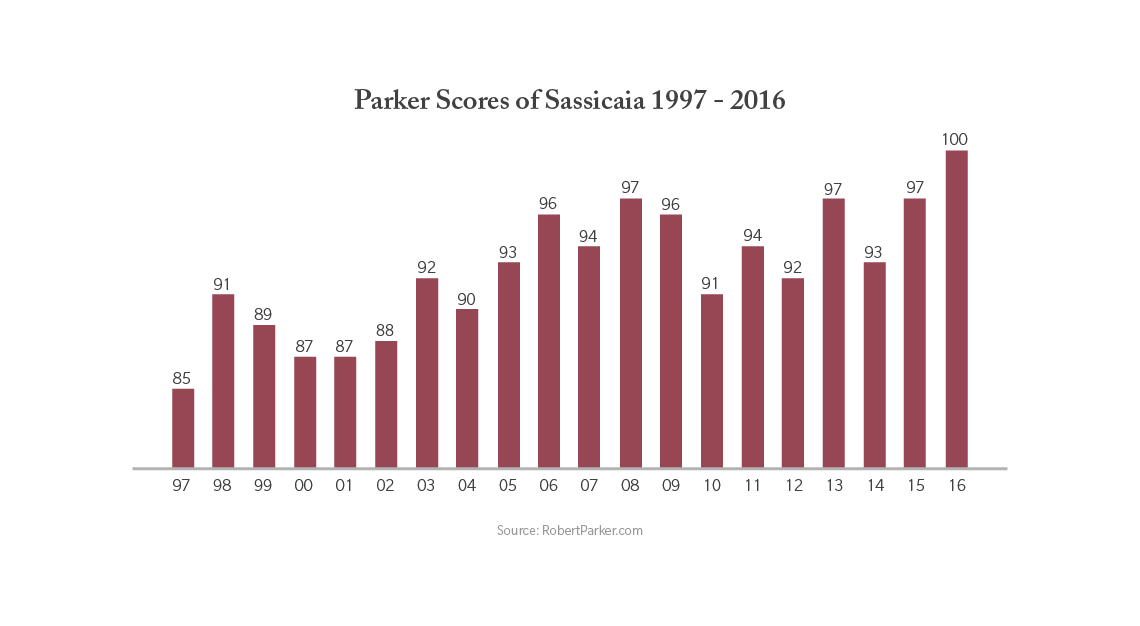 Not only did Sassicaia’s scores improved, its demand enjoyed a healthy surge, too. According to the London International Vintners Exchange (Liv-ex), Sassicaia 2015 was the second most traded wine in 2018. On Wine Searcher, a search engine that wine merchants and serious collectors frequently use, the popularity of Sassicaia has been rising consistently from the 13th most searched wine in 2014 to fourth position today.

Standing at 97 points, Sassicaia 2015 is doubtlessly one of the most well-regarded and highly sought-after wines on the market. A year since the 2015 vintage impressed the world of fine wines, Sassicaia released a new vintage, the Sassicaia 2016, which received an even higher score from Robert Parker’s team – a perfect 100 points.

After stating that Sassicaia 2015 and 2016 are similar vintages and that the latter has slightly more acidity, influential wine critic Monica Larner concludes: “To my mind, the Sassicaia 2016 stands tall next to the epic Sassicaia 1985 vintage that set the ultimate benchmark for vino Italiano.”

Let’s put some numbers to these exceptional vintages. Sassicaia 2015 price has increased 44.2 per cent since it first started trading in February 2018. The legendary 1985 vintage has a stellar 14.1 per cent all-time CAGR. Given that Sassicaia 2016, which is a better vintage than its 2015 counterpart and possibly on par with the 1985 vintage, what then is the investment outlook for the 2016 vintage? The table below can shed some light on this question – remembering, of course, that past performance does not guarantee future results. 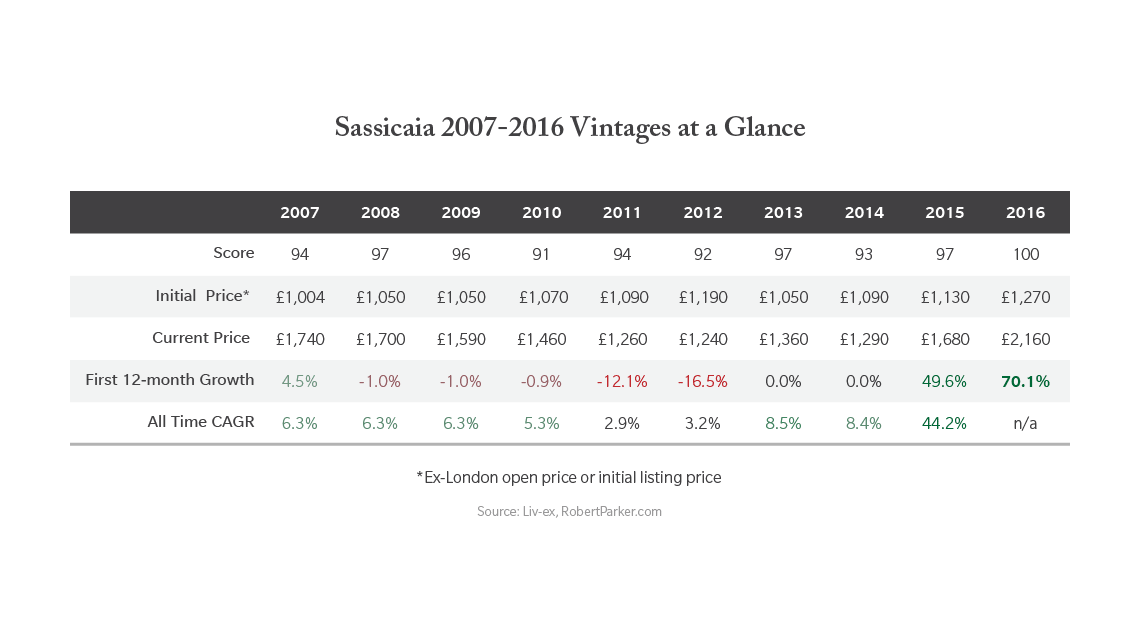 The overall performance of Sassicaia 2007 to Sassicaia 2016 suggest two things. First, over the long run, all vintages yield positive returns well above inflation rate, making this wine a sound investment option. Second, no vintage has passed the £2,000 (S$3,568) mark other than the Sassicaia 2016 release, which achieved this just two months after its release.

The tremendous growth of 70.1 per cent since its release makes the Sassicaia 2016 vintage initially attractive, especially when one can observe that first 12 months performance seems to be a good indicator of future growth potential. However, given that it’s currently standing at price higher than all other recent vintages, one may ask: how much room is left for the Sassicaia 2016 to appreciate?

Remember, it is still early in the year for wine gurus and publications to rank the new releases of 2019. A wine as promising as Sassicaia 2016 is most likely to make it to the top of serious end-of-year lists. In the world of fine wines, positive critical appraisal is often linked to sudden jumps in market value and demand. In terms of mid to long-term investment, Sassicaia 2016 can be rewarding if investors acquire stock at a competitive price and hold for the long term. The legendary Sassicaia 1985 vintage is now trading at £29,000 (S$51,726) per case. According to Liv-ex, it took three years for the Sassicaia 1985 to double its initial listing price in the pre-internet age. In the last five years, the Sassicaia 1985 has continued to increase in value with a CAGR of 14.3 per cent. 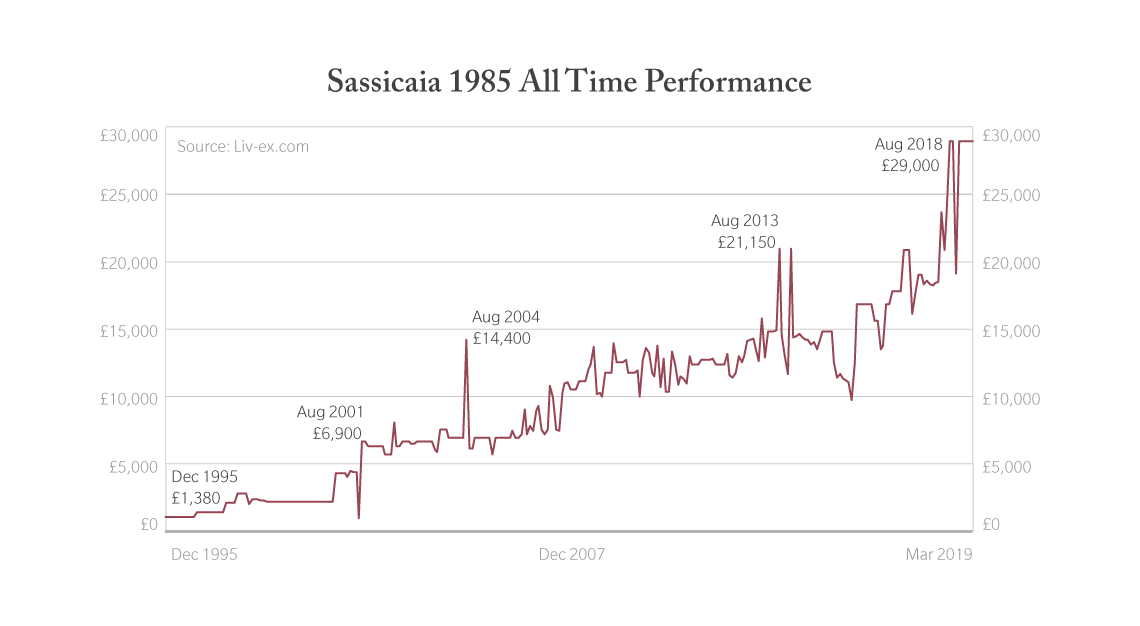 If we take the impressive run of Sassicaia 1985 as a template for the Sassicaia 2016 vintage, buying a few cases of Sassicaia 2016, even if it’s at a higher price, may not seem a bad investment with a time horizon of five to 10 years.