Cult Wines makes a case for Château Figeac, who looks to be the strongest contender for promotion to the top tier of Saint-Émilion in 2022

Château Figeac is one of the oldest properties in Bordeaux, dating back to Roman times (2nd century A.D.) when the Figeacus family gave their name to the villa built on the same location where Figeac sits today.

It changed hands numerous times, but it was in 1946, when Thierry Manancourt acquired the estate, that it took on its modern form. Over the ensuing 70-plus years, he and his family confirmed Figeac as an elite name in Bordeaux’s Saint-Émilion appellation.

Between 1946 and his passing in 2010, Manancourt established himself as one of the region’s most influential and admired characters. Known for maintaining tradition when appropriate but bringing innovation when necessary, Figeac was not only the first major estate in the Right Bank to use temperature-controlled stainless steel vats in the fermentation room, but also the first to produce a second wine – allowing for greater concentration and quality in the grand vin, whilst remaining commercially viable. 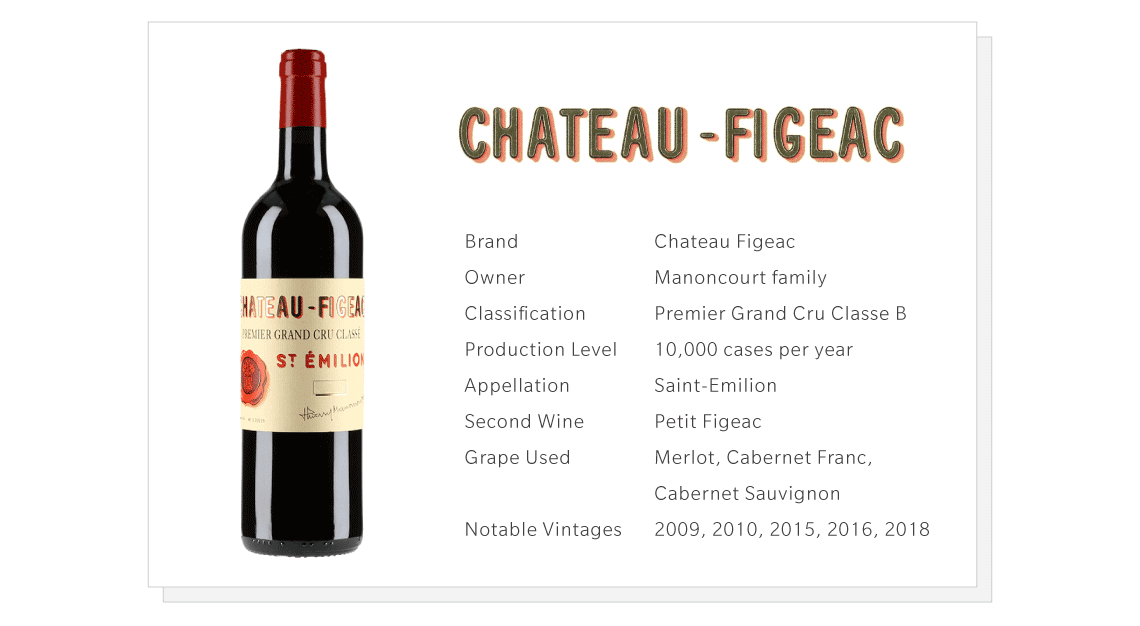 Since 1988, Eric d’Aramon had been at Manancourt’s side, not only as his son-in-law but also as Figeac’s Director. Together they produced a wine with a reputation for its traditional and austere style; a wine that was notoriously difficult to judge when tasting en-primeur, in part due to the unusually high Cabernet Sauvignon component compared with the ripe Merlot-driven style of its neighbours. Since 1966, (now retired) wine critic Robert Parker had remarkably awarded scores of 90 points and above to just three vintages of Figeac: 1982 (94pts), 1990 (91pts) and 2012 (91+pts). This led to rumours suggesting he had fallen out with d’Aramon, culminating in Parker failing to report on several vintages of Figeac. Other leading critics, less attracted to powerfully concentrated fruity wines, have been far more complimentary.

The 1955 Classification of Saint-Émilion

Not to be confused with the 1855 Classification of the Medoc which has only seen two changes in its 164-year history, the 1955 Classification of Saint-Émilion is reviewed every 10 years with the appellation’s estates being judged on several criteria, including wine quality, reputation and brand, estate and quality of the terroir along with management of the winery.

Wines are then classified into one of these ranks:

Figeac not being awarded promotion at the most recent reclassification in 2012 – from Premier Grand Cru Classé B to A status – was the catalyst for a number of changes at the estate in 2013. Amidst much controversy, leading oenologist Michel Rolland was hired to consult on winemaking and Jean Valmy Nicolas of Château La Conseillante brought in to handle commercial matters. Shortly after, d’Aramon was retired and Frederic Faye was appointed the new Managing Director.

Concerns that the wine would move too far away from its traditional style were quickly dispelled and confidence firmly installed as critics’ scores increased for subsequent vintages, marking a new era for Figeac. 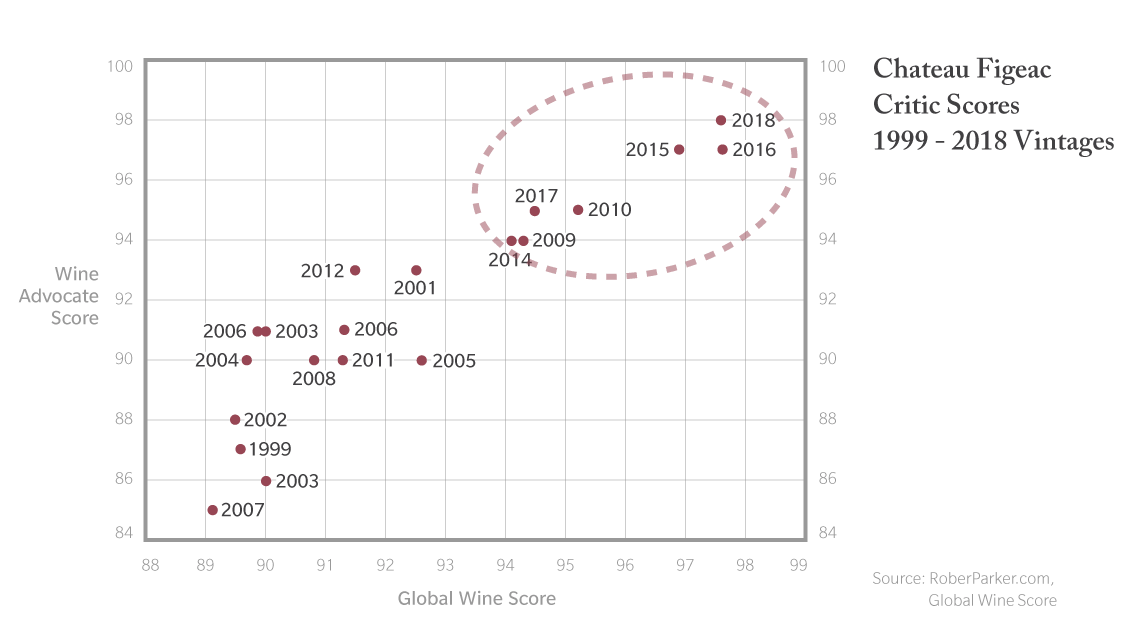 In the following years, Faye made a few other important changes: fully modernising the cellars; additional planting of Cabernet Sauvignon to suit the gravel soils; and massive renovations to the estate’s facilities. When Cult Wines were at Figeac tasting the 2018 vintage in April earlier this year, it was conducted in a temporary cabin as much of the property remains under the framework of scaffolding with cranes towering overhead – an image at odds with the usual picturesque Saint-Émilion landscape.

Where Figeac failed in 2012, Angélus and Pavie succeeded. Both were promoted to Premier Grand Cru Classé A, joining the only two other estates who have managed to attain the highest ranking since the classification started over 60 years ago: Château Ausone and Château Cheval Blanc.

So, what impact did this have on these four wines’ bottle prices? 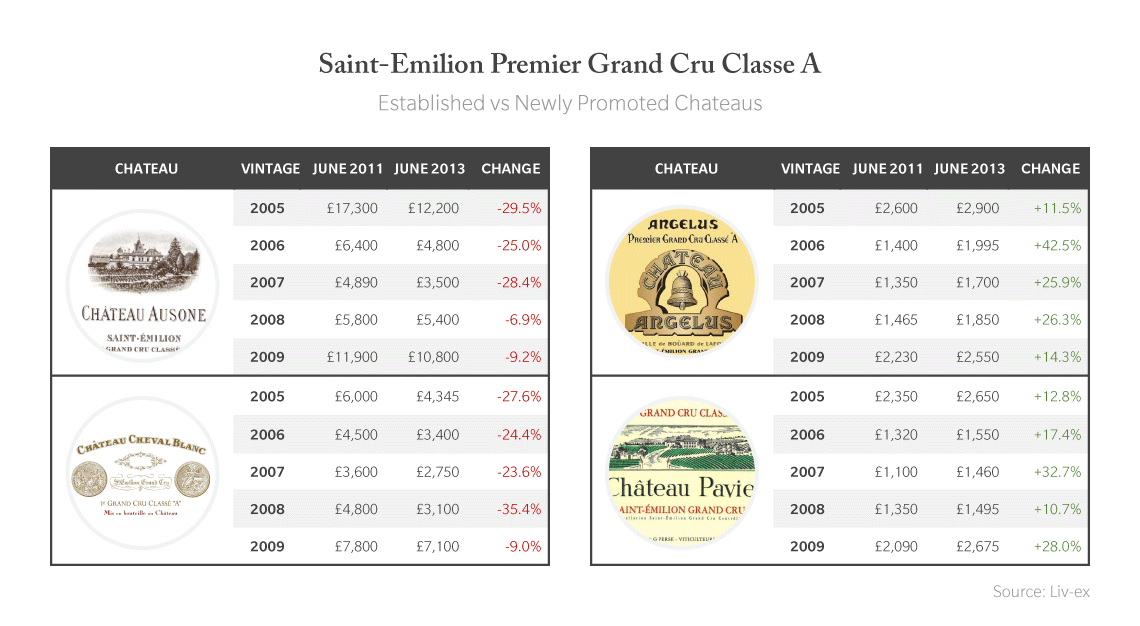 Despite the fact that the Bordeaux market saw its worst two-year period in the last 30 years from June 2011 to June 2013 – Ausone and Cheval Blanc are a testament to this as seen above, with an average -21.4% in price across five vintages – Angélus and Pavie performed strongly with an average price increase of 20.7%.

Is 2022 the year for Figeac’s promotion?

It’s impossible to predict with any degree of certainty as there’s an untold amount of Bordolitics (Bordeaux politics… you heard it here first) going on behind the scenes.

At the time, there were many surprised by Figeac’s exclusion from the 2012 shakeup. So with the change in team, vineyards, cellar and other facilities for the better, the same crowd will surely be placing their chips on a more positive outcome a decade later.

As it stands, Figeac is priced more-or-less fairly and we expect it to perform in line with the wider Bordeaux market, if not just ahead due to prevailing positive market sentiment. Investment downside is low.

If it benefits from the reclassification in three years’ time, it will look reasonably attractive against its closest peers Pavie and Angélus, but will be a ‘bargain buy’ next to Ausone and Cheval Blanc!

Although Figeac looks like the strongest contender for promotion to the top tier of Saint-Émilion, it’s definitely not a sure bet. Thankfully though, the wine still offers attractive value relative to its current counterparts, particularly in ‘lesser vintages’.

This Week in Luxury: The latest from Dior, Gran Turismo 7 and more

The Answers With... product and interior designer Lee Broom