As 2021 kicks in, we explore social media and its irrevocable hold on our lives during the tough pandemic-hit year

It’s the pandemic. Hands up if you used that excuse even once this year to explain the reason why your screen time has increased at least twofold in a desperate attempt to break away from the mundaneness of this new, bleak plane of existence. But as life slowly crawls back to its normal state of being, this incessant itch of scrolling through a rehearsed repertoire of social media apps has, apparently, become the new normal.

Social media isn’t good or bad. Social media merely is. It is a tool that has been utilised and repurposed according to the intentions of its users, but ultimately is nothing more than that: a tool. However, this year, the tool has been turbocharged in speeds like never before – with Facebook maintaining its global dominance, reportedly reaching 2.74 billion monthly active users as of the second quarter of 2020, a 12 per cent increase from 2019. No surprises here, given the growing efforts – smartphones with pre-installed Facebook apps in Myanmar, Mark Zuckerberg’s push to offer free internet access in India, and the app’s ever-changing algorithm, to name a few – to seamlessly integrate the online medium into our lives.

And this isn’t just about trying to alleviate the ennui of quarantine. Social activism and politics have found a breeding ground in the social media sphere; businesses have broken through the cacophony with viral campaigns that cemented their brand in the consciousness of today’s consumers, and even the industry’s biggest head honchos have found themselves squaring off with lawmakers in one of history’s most notable hearings. Go figure.

Why is a rehash of the year’s biggest social media milestones part of Robb Report Singapore’s holiday wish list, you’d ask. Social media is here to stay, and chances are, you’re going to see more of it lurking around. This list is more than just a compilation of tangible desires – much can also be gleaned from the successes and pitfalls of social media, and more importantly, how the human race has consumed it thus far. We look back at 2020’s most eminent digital breakthroughs (and breakdowns).

The death of 46-year-old George Floyd in a case of police brutality in Minneapolis, United States, in May last year had triggered ongoing protests worldwide, espousing a social global movement called Black Lives Matter. Instinctively, this refuelled outrage in the US over the continued systemic racism of its African-American population, reviving an online movement of hashtags and screen blackouts (the original #BLM started in 2016) in favour of the oft-oppressed minority. The event eventually steamrolled into real-life protests – pandemic be damned. Major news outlets that were reporting the protests also shone a light on the ensuing riots and looting, feeding fodder to cynics by shadowing the entire movement with dark clouds of chaos and doubt.

Interestingly enough, social media had a different tale to tell. Here were real-life, real-time stories of those who were actively taking part in the protests – their experiences, their encounters, their sorrows. Those on the ground posited that it was the police who’d instigated the violence, turning peaceful protests into riots, changing the narrative of a campaign that called for equal rights into something disrespectful.

A hashtag war then ensued, as liberals called for governments to #DefundThePolice, demanding more accountability from the men and women sworn to protect lives. This gave a resurgence of the opposing #BlueLivesMatter, where cops (and their supporters) took a defensive stance as they felt their livelihoods being threatened. In the midst of this, white supremacists took up the banner of #WhiteLivesMatter, which received a resounding retaliation from (of all people!) K-pop fans, who reclaimed the hashtag in video posts of their favorite stars. This was their valiant (and wildly successful) attempt to overcrowd the hashtag, so that any search for “White Lives Matter” would essentially bring up a video snippet of South Korean girl group BlackPink performing ‘How You Like That’.

It’s all crystal clear: news has been democratised across the playing field, and major news corporations no longer have the monopoly on the public. Social media has become central to BLM movement’s growth, mobilising both old and new activists, convening other similar movements, and lending activists the power to control the narrative by posting personal experiences from protests. For certain, social media would then become crucial in supporting future “acts of solidarity.”

2020 was also a year of elections – the Belarus presidential election, Singapore’s General Elections and the US Presidential election were reiterations of how social media makes for an excellent breeding ground for political persuasion. But beyond utilising online platforms for political crusades, the 2020 US elections, in particular, became a litmus test on ethical values for nominees Donald Trump and Joe Biden; one was castigated for holding in-person campaign rallies despite a US surge in COVID-19 cases, while the other had opted for a more unconventional approach: socially distanced, drive-in campaign rallies. No prizes for guessing which is which. 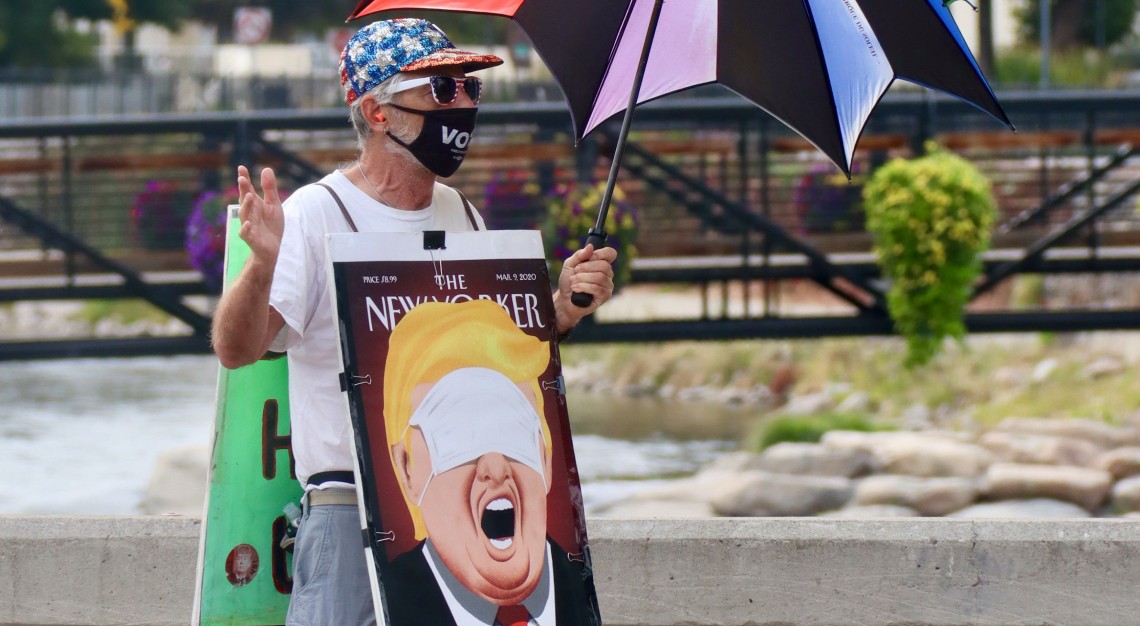 The 2020 US election – which concluded in Joe Biden’s favour – turned out to be one of the biggest takeovers of social media in 2020. As Election Day drew near and early voting began, social media apps were replete with images and videos of voting lines, ballots, and “I Voted Early!” stickers, face masks and other types of accessories. Even before this, controversial actions by the former POTUS were circulating the socials: articles of a significantly reduced number of polling booths causing people to virtually be unable to vote; videos of polling agents calling into question the rights of people to vote; stories of the reliability of the postal service being doubted as it is unsafe and susceptible to manipulation.

There have been remarks going around that 2020 has been a really bad year, pandemic aside; however, it is very plausible that the rise of social media has merely exposed the systematic oppression that has long persisted in the American society.

One of the key moments of this year’s Singapore General Elections was the whole debacle with Raeesah Khan, a Workers’ Party member. Reportedly, some of her older tweets from her private Twitter account were dug up and put on blast, resulting in numerous conversations about her on social media. In the meantime, the newspapers plastered her face on their front page, and circulated her “viral” comments along with the consequential fallout. Back in the social media sphere, fervour built up into the famous hashtag #istandwithraeesah, with proponents defending her courage to speak about her experiences as a minority. But on the other end of the spectrum, opponents blew the reverse racism horn, denouncing her as inciting racial discrimination – a sheer reminder that although essentially a myth, reverse discrimination still has its place in Singapore’s society.

Whether the saga had any effect on the final election results will always be a topic of controversy, but the presence of social media definitely brought the politician and her party to the forefront of numerous debates.

By now, almost everyone would have heard of the Chinese app TikTok, and its subsequent “challenges”. Originally featuring mostly Chinese songs and dances that people would lipsync and/or dance to, the brand has grown globally, reaching 800 million users across 150 markets in 75 languages. Kudos for an app that’s less than four years old.

Prior to the global pandemic, TikTok was predominantly favoured by tweens and teens, as a platform to post prank videos or trending dance routines. But since the lockdown, the app has brewed into a leviathan of user-generated content, helping many cope with fear, anxiety and boredom through 15-second clips. The app has since appealed to a wider demographic; today, based on findings by Comscore, approximately 50 per cent of TikTok’s global audience is under the age of 34, with 24.5 per cent between 25 and 34.

TikTok’s massive popularity has been capitalised on by brands, using it as a tool to widen their brand awareness and connect with customers. As fashion weeks across New York and Paris were cancelled, fashion empires such as Louis Vuitton and Saint Laurent decided to take their runways directly into the homes of the public, and worked with the app on curating a digital rendition of fashion month. To top that off, ‘attendees’ were encouraged to post their #ParisFashionWeek outfits to flaunt the looks they had intended to wear. With virtually everything going, well, virtual, it is a true marvel that the human spirit of determination and drive demands that life move on as best as it can.

But the app has its own battles to fight – especially when the Trump administration has put in executive orders to have it banned – together with WeChat – over national security concerns. This could be seen as a political move by US’ 45th President to foster anti-China sentiment, in an attempt to garner support for the Republican Party in his re-election bid.

But how can videos of teens dancing to pop music actually be a threat to anything? What the Chinese could and would do in the future with the app is a bottomless pit of unanswerable questions. Oddly, what eventually happens to this video-sharing app would indicate whether China and US are headed for renewed ties, or a superpower deadlock with potentially calamitous consequences for world peace looms ahead.

Going into the sum and substance of the year’s most notable social media phenomena wouldn’t be just without delving into the dark underbelly of Silicon Valley. Long overdue, chaotic and satisfying – these are words to describe an antitrust hearing involving tech bigwigs that were accused of snuffing out the enterprise of others in their pursuit for success.

On July 29, 2020, the founders of Facebook, Google, Amazon and Apple were presented in front of an antitrust panel to answer questions pertaining to their monopoly of the online market, amassing private data of its users, and what their intentions were. The final report of the hearing determined that they were each guilty possessing characteristics of anti-competitiveness. The Big Four have progressed from humble beginnings to become massive oligarchs of the world, and politicians are taking a second look into US antitrust laws.

While the epilogue of this story is still to be written, the hearing serves as a timely and persuasive call to action for the new US Congress and administration to carefully determine the new laws that could discourage such monopolistic behaviour. But arguably, there could be a small caveat to reshaping the tech market. While a renewed form of antitrust law will be a necessary feature for industry players, it raises a concern that disrupting the large tech companies may simply mean having to cede global market share to Chinese tech giants.

This Week in Luxury: The latest from Aman, Louis XIII and more